Tilkee is a young company that helps sales and marketing teams to be more efficient thanks to a digital document tracking solution. Creating a company is a very exciting journey, and seeing it grow end evolve is the greatest reward.

As in every small structure, Tilkee’s evolution is very challenging: between rapid growth, conquest of new markets and constant innovation – both in the product and the organization itself – everyone needs to be 100% committed. To keep this development steady, the team needs to be very flexible to adapt to rapid changes, while consolidating the foundations to ensure the stability of the company.

As the teams grow and the conquest of foreign markets goes on, it becomes more difficult for directors to keep a close contact with their employees. But this synergy and will to take the company to the highest level is the very reason it was successful until then. So how do you ensure this great dynamic is maintained as the company grows?

Keeping a strong bond between employees, wherever they might be

Sylvain Tillon – co founder of Tilkee – was about to open new offices in London and was very eager to preserve – and extend – this caring work environment for the new team. And getting an employee engagement tool would also benefit the teams in France: creating a strong bond with the newly hired employees would be a lot easier.

Sylvain Tillon chose Zest for its versatility: available in French, English and German, it was the perfect way to gather every employee around one friendly app.

Managers can be assured everyone in their team feels ok

A manager’s day is a race. Often split between strategical decisions and last-minute crisis management, it becomes very hard to reconcile this fast-paced rhythm with the attention and support they would like to give their teams.

Sylvain Tillon decided to use Zest and the engagement meter precisely for this reason. With the engagement meter, employees can rate the company from 1 to 10 on 18 engagement levers gathered in 6 categories: working conditions, relationship with colleagues, career, relationship with the manager, fulfilment at work and alignment with the company. A library of 100 predefined questions was created with the help of a psychometrics specialist to improve their quality and phrasing to easily transform the results into concrete actions. The results are available in real time and centralized in dashboards to make their analysis easy. 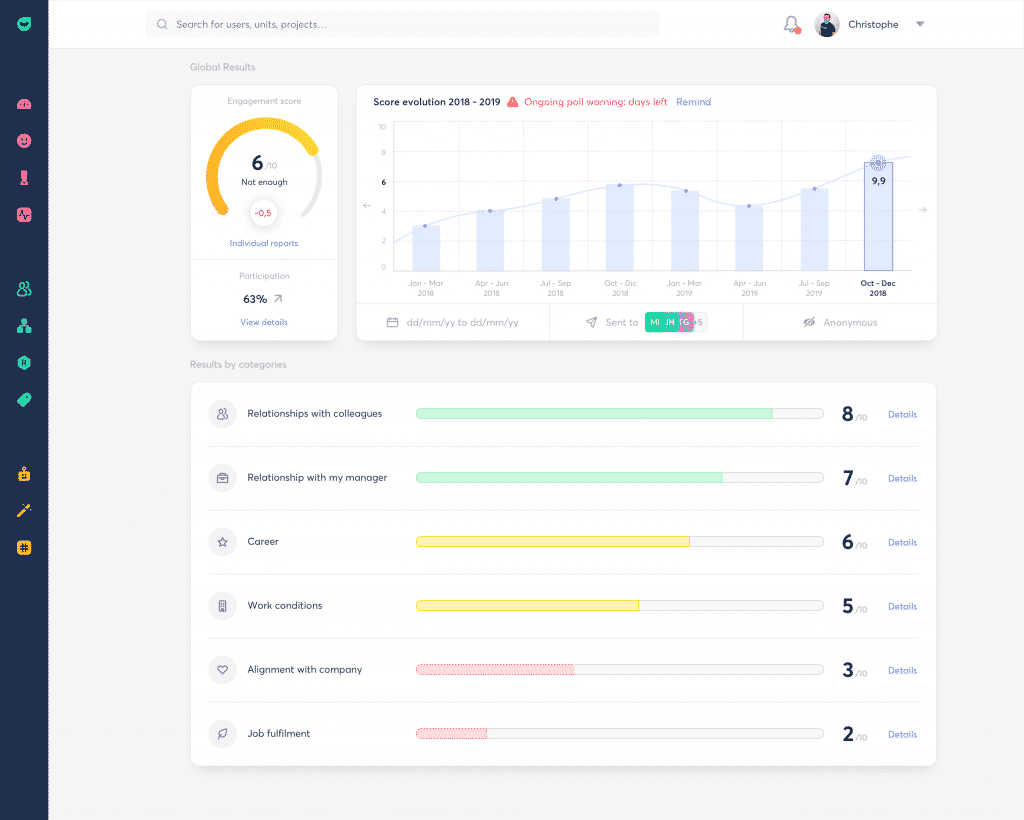 In order to take the pulse of the company, Sylvain Tillon launches engagement meter campaigns every month. Anonymity is available on Zest, but he decided to use the “public responses” option to promote an open communication and to take corrective actions faster. Everyone is free to fill out the survey or not, depending on their difficulties or needs. The principle is simple: if someone has an issue or something to say, he replies to the survey. If not, he has no obligation to do so.

All the employees downloaded the mobile version of Zest to make its use easier. Sylvain Tillon – as a manager – is the only one who uses the desktop version, as it centralizes manager dashboards. After a campaign, he analyses stats and comments to ensure the best follow-up:

« I very rarely deal with the problem directly. Usually, I rather mention it to the person that can help in the given situation. But I do have a close look at the results to see if there is a real issue within the team. »

Managers do not only need to adapt their time and support according to their team members’ needs, but they also have to take each personality and sensitivity into account.

That is why Sylvain Tillon chose to use the engagement meter :

« We can ask our employees what went well for them and what didn’t every month and intervene if there is an issue. We can deal with potential difficulties quicker, instead of finding out that someone is struggling by chance. It enables us to act before the point of no return. »

The issues mentioned in employees’ feedback are representative of this great diversity in employees’ perceptions – and thus, in their management needs. Among the most common ones are the impression feel lost in a mission, the lack of information about the company’s latest developments, or the feeling of isolation when one of the team members is working on a different project.

It isn’t easy for a manager to know how to deal with complex issues. The key is to try different things out and to see which of them work. And this is exactly what makes Zest so useful to Tilkee: after the first employees’ feedback, corrective measures were taken. Sylvain Tillon was then able to follow up on the subjects to see if the situation evolved or not and why:

« We know that Zest also gives insights on team stats, but at Tilkee, what is important to us is to ask employees’ feedback on an individual level. We want to be able to act before things get complicated for the person struggling. And Zest is a way for us to know if we could fix the situation or not. »

What made this project a success

With Zest, Sylvain Tillon created a flexible and caring work atmosphere. The app is at the service of the employees and adapts to their use so a positive communication can be built around honesty and spontaneous feedback.

Another reason for the project’s success at Tilkee was Sylvain Tillon’s commitment to promote the use of the app and to get involved in the follow up of results. His attention to what people were experiencing and feeling was authentic, and his team felt it. A relationship of trust was naturally created from this sincere dedication. And what better way to encourage people to work well and to go forward as a team? This is how a virtuous cycle pushing employees to give their maximum for the company can be achieved.

Zest was not only a way to maintain a strong bond between the existing team and the new employees in London: it also improved the internal communication and sense of community at Tilkee.

« I’m very pleased with Zest and the engagement meter that lets us know monthly how employees are feeling. It is very simple to use and enables us to react quicker when they are struggling. »

Want to see your story alongside other leading companies already boosting team performance with Zest?
Start your 14-day free trial now!
Why ZestStart a Free Trial

Read the full story
Julien GAZEL
Contract Manager
Historically, and as in most companies, the notion of evaluation at EDF was very top-down and done once a year. Zest enabled us to set up a system that allows employees to be involved in defining their objectives and managers to quickly identify issues and frustration points through monthly follow-up. All of this is at the service of the success of the employee, the teams and, therefore, the group.

EDF transforms the yearly performance reviews into a positive experience for its employees and a performance lever for its managers.

Read the full story
Eric Guinard
CEO Decathlon Japan
Zest enables us to monitor the degree of motivation and the overall mood within teams. It’s like a cockpit that makes it easy to see whether everyone is benefitting regularly enough from a check-in with their coach or boss.

Read the full story
David Varras
Company Manager, T&B Vergers
Zest has become indispensable both for our employees to express their feelings, to develop new ideas and organize work sessions. It is a very important aspect of the responsive and local management that we have put in place.